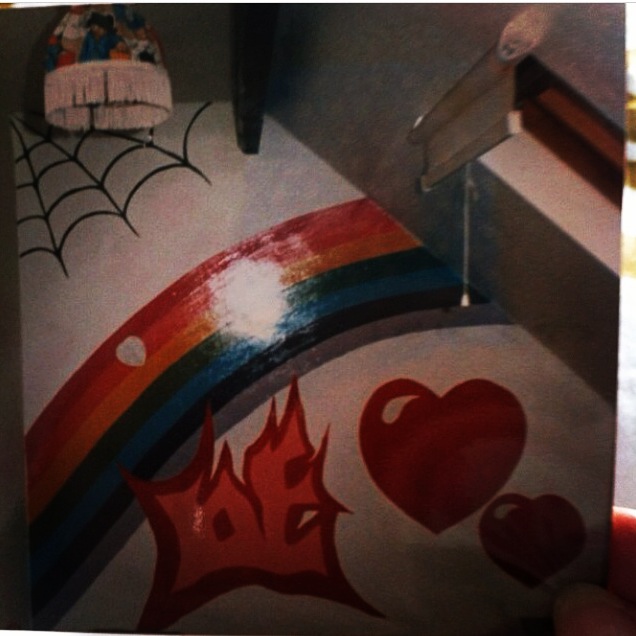 I spend a great deal of my time researching these days. Im always reading something, talking to someone about something, travelling to look and photography something or writing about something. Its part and parcel of doing a PhD on a part time basis and its very very often a lonely road because I have to do all of this away from my main full time job. But I believe that if you are passionate about something then you should behave passionately about it. This was my bedroom in 1983. This wall was completed by me and my best pal at the time Suzanne – she was an amazing portrait artist and unlike me also did art at school (which by this time I wasn’t attending all that much). I was a nightmare at this time in my life. I was rebelling against everything and everyone and I was also suffering/hiding the beginnings of what was possibly early signs of an eating disorder. But apart from the eating disorder bit – an explanation of which I fully intend to return back to at some point on this blog – I was – quite honestly – having the greatest days of my life.

Birmingham back then was covered in graffiti. All the buses were covered in graffiti, all the underpasses were covered in graffiti. I used to to go up to town every Saturday to buy records from the rag market, go to the Army surplus store and go to a junk shop off new street to look for and buy sixties clothes which I would then bring home and sew to alter so they fit me like a glove. I would ride down the long escalator by Mark One, check out whoever was looking particularly cool in the passage bit at the bottom, chat to all my mates and sit and people watch for a while. I was getting completely engrossed in the Mod culture and when I wasn’t running away for days on end as was my thing at the time, I was either out partying up town, dancing the night away in various clubs, or just generally being just free.

This room of mine was in the loft and it only had a tiny little velux window in the roof which was just big enough for me to lean out of and smoke secretly if I stood on a chair. It was how I managed to get attacked and bitten by a squirrel who was running around the roof and who got a bit territorial – my Dad sorted the squirrel – the family were all horrified I had been attacked but no one ever knew (until now hahaha) that I had been hanging out of this window happily going through a pack of ten B & H and having a stare off with that squirrel prior to the attack (sorry Gabby hahaha).

My point is this – we had no phones, we had virtually no money, we used creativity and imagination and we learnt stuff by talking to each other. Whilst the internet and this ‘like me, love me’ culture has grown up all around us, I often wish I was just back in here, plotting whatever really stupid idea I was planning on doing next. I think back to all that and then I think – well – here I am, thirty years later – Ive set up camp in the smallest room of the house I have worked hard to keep, Im surrounded by photographs I have taken of famous people and pictures of graffiti completed for me by graffiti writers I respect, listening to the music I love albeit on a Bose – planning whatever really stupid idea I want to do next.

And now Im gonna eat a packet of Space Invaders……….